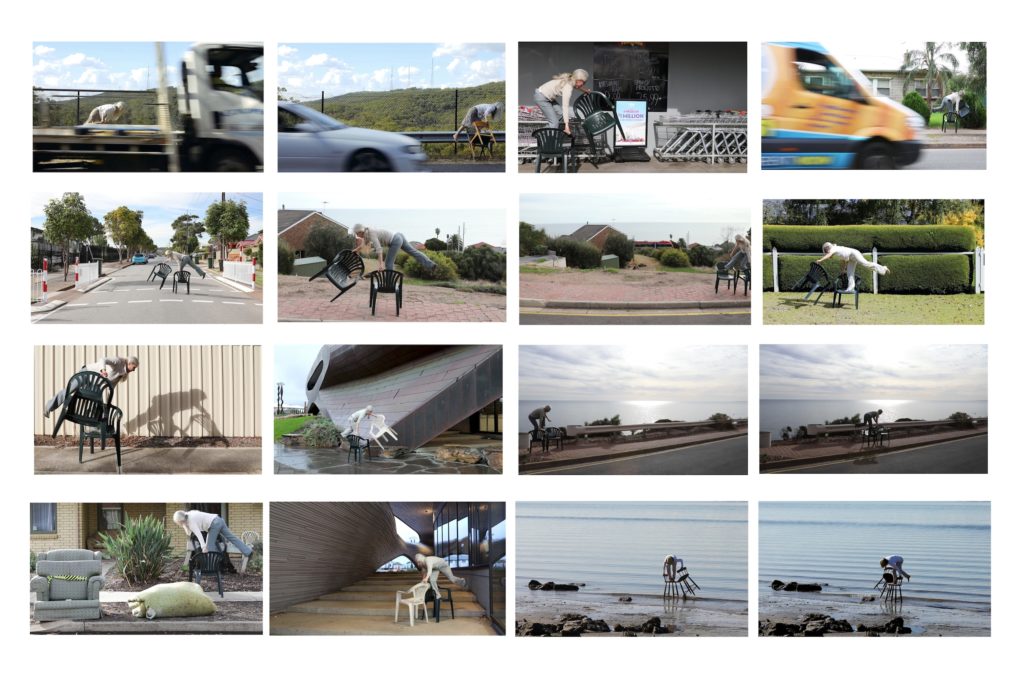 On my open top two seater, un-motorised but elevated, I am a visitor, striding through the neighbourhood. Along the boundaries, fence-lines and roads, I circumvent Adelaide’s peri-urban and suburban districts. Here, where the landscape is begrudgingly slotted into the built environment, I laboriously make my rather lonely way. I wander through space that is claimed for human convenience, but, is there really anybody out here?

Rarely I cross paths with other people; mostly in a car pressing past. Maybe, If I’m lucky, I end up beyond these partitions and catch a glimpse of the vast, majestic landscapes of South Australia.

As an integral part of the daily lives and rituals of Western culture, the chair is seldom considered beyond its presence and aesthetic value as a functional object. Aside from considerations of design and the ergonomics of comfort, it is often overlooked or at best taken for granted as a vital participant and silent witness to verbal exchange, the consumption of food, and the labour of work. The chair as a commodified object is in fact a central and vital presence in the social functioning of family, community and modern society in general.

Historically, the chair was reserved only for powerful leaders and noble elites. Most people lived lives without having sat on one. Later, the Industrial Revolution ushered in mass production techniques making it more accessible to the rising middle classes as a mainstream item of domestic furniture. And yet despite its abundant visibility as a commonplace object, the chair maintains its associations with authorial hierarchies, lending its very namesake to positions of power in the meeting rooms of those presiding over communities and organisations, corporations and governments. The very conscious placement of the chair – its position in a room – makes a powerful point and locates the elevated sitter as Chair of the board, head of the table, head of the State, nation, or Church. On the other hand, an over turned chair instantly signals chaos, conflict or struggle in an apparent loss of power or the removal of it.