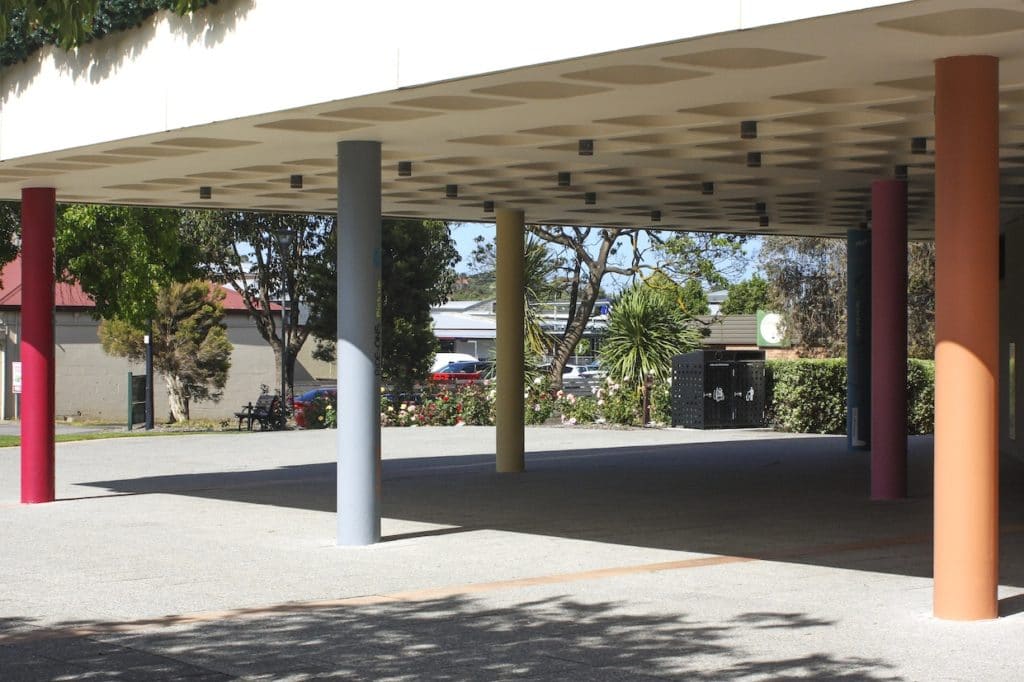 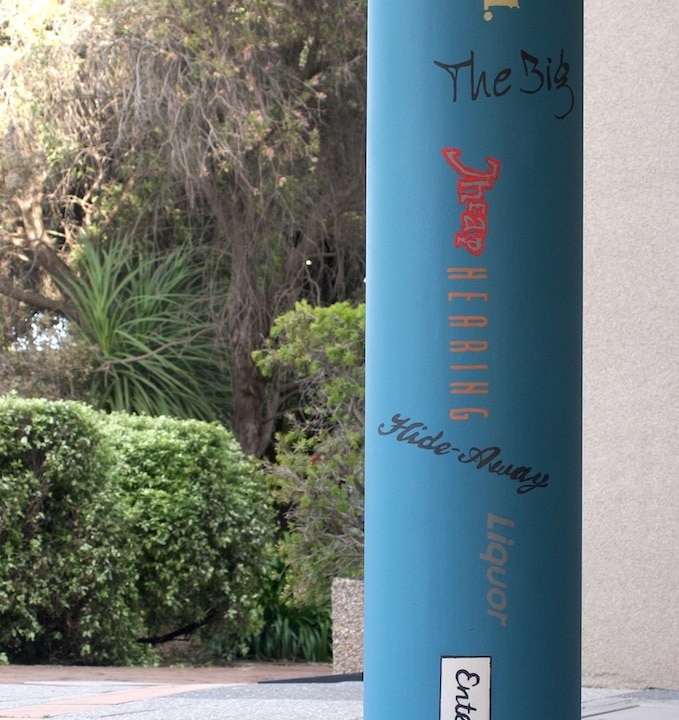 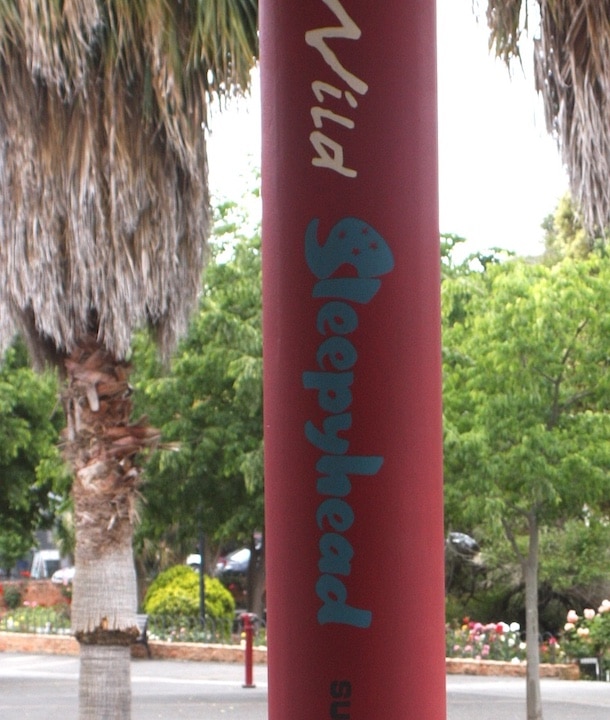 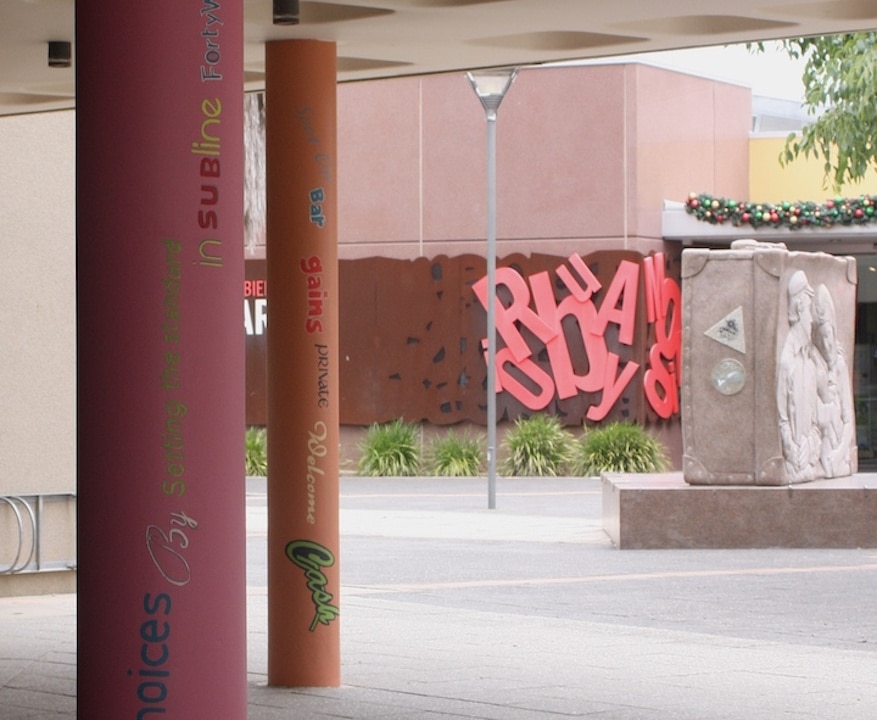 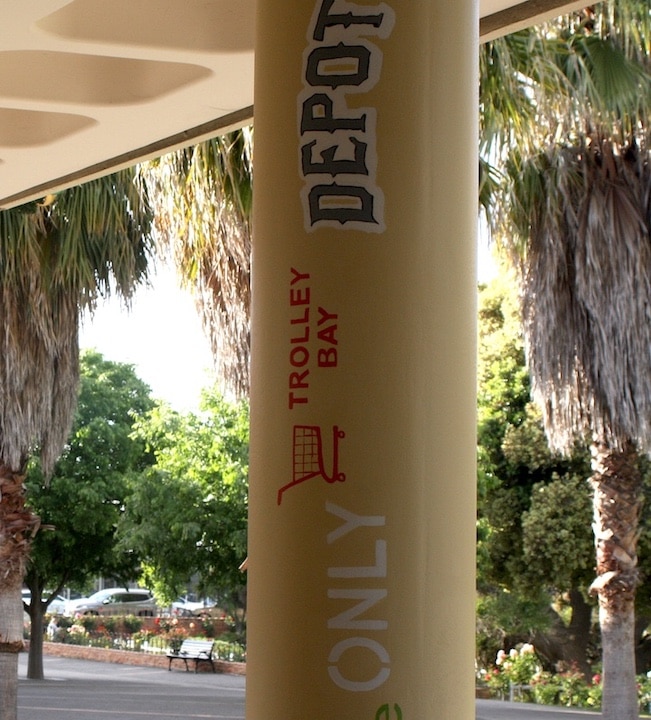 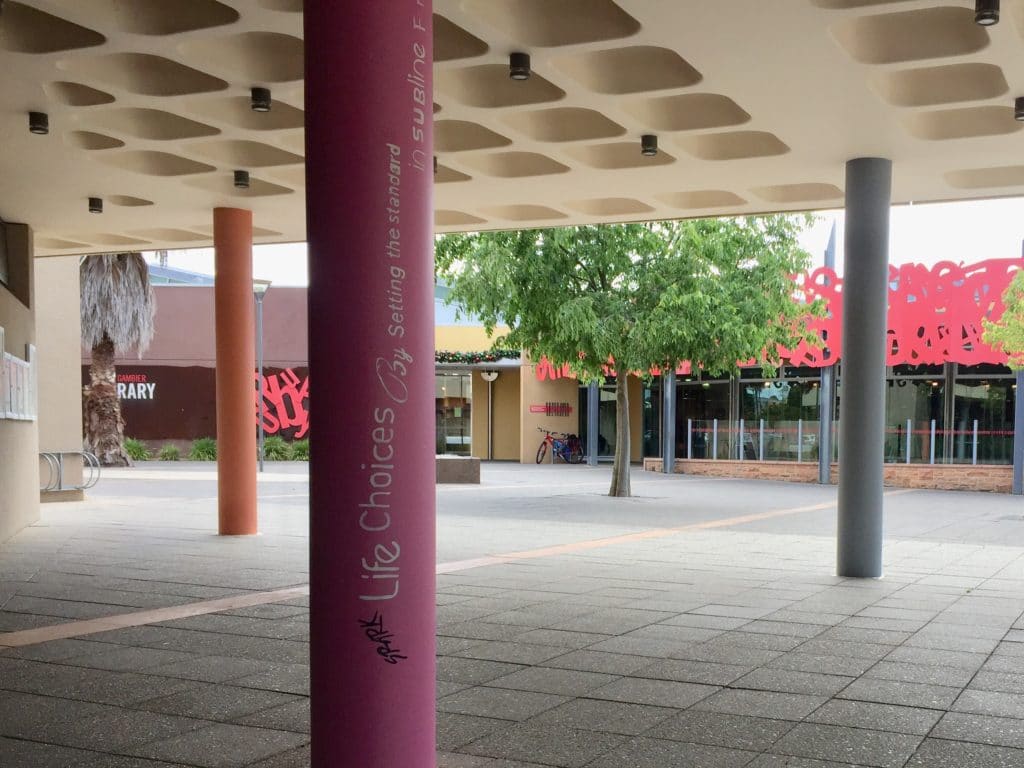 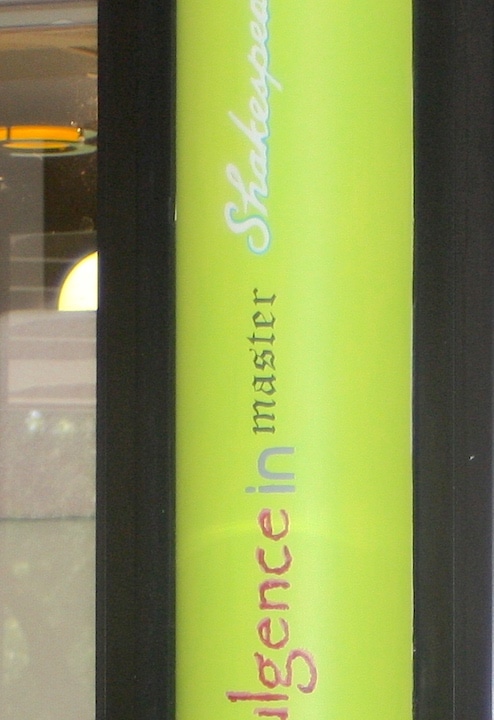 Public Art at the Sir Robert Helpmann Theatre, supported by Country Arts SA, in Mount Gambier. In December 2019 the results of both residencies were presented: Jesse Budel’s STRATA in the foyer and my work in the entrance.

Serena Wong, curator at The Riddoch Art Gallery in Mount Gambier contributed with an illuminating text and the Mount Gambier paper Borderline wrote an article.

For over a hundred years the cut-up technique has been used by artists to take words out of an expected context to force us to look anew at the everyday. After the First World War a group of artists who called themselves Dadaist first experimented with cut-up techniques to create poetry or writing from a random assembly of words, it was an impulse that was later shared by the Surrealists and then more famously by the writer William S Burroughs.

In Cynthia’s work Town Thoroughfare Readings, the cut-up technique is used as a way to break down thresholds, while drawing our attention to the artifices of the urban landscape.

It would seem counterintuitive, but we all recognise the phenomenon of failing to really see something the more often it appears in our lives. Regularity breeds familiarity, and familiarity breeds complacency. This complacency means that advertising, billboards and signage, all designed to sell us something, and is part of our regular, everyday lives, draws little critical attention. We have adjusted to this oversaturation as part of life, meaning we very rarely consider how public space (used by all of us) is dominated by words, usually animating us to consume, directing us somewhere, or describing how a space should be used.

Cynthia cuts up these signs, directions and calls to buy, and assembles them together, seemingly random on the pillars of the Sir Robert Helpmann Theatre threshold. Using this public space, and signage observed in the surrounding, Cynthia has created a space with a certain sense of familiarity. It breaks down the threshold of theatre-making and the imposing architectural entrance, inspiring curiosity and drawing people in.

A threshold is both a signifier of an entrance and, a moment of dramatic change, synonymous with the idea of a point of no return. The threshold of a building can seem impenetrable, rather than an entrance it can present as a barrier, and that passing through it presents unknown challenges. In Town Thoroughfare Readings, we see a democratisation of the threshold. Using the familiar, Cynthia breaks down the barrier of the threshold turning it from a place of ‘no return’ into an extension of the recognisable urbanscape.

In her assemblage of these texts and typographies we see another great modernist tradition. By bringing together everyday objects in unexpected ways to trigger or unlock the subconscious mind, Surrealists believed they had discovered the key to creativity and way to break free from the rules of an oppressive society. The freewheeling associations we make as we see the texts and detect the fonts in Cynthia’s work, draw unbidden memories, and reactions. It is this poetic interlude that links the space and the building with the people who live here, who make Mount Gambier what it is. It transforms concrete pillars into repositories of place, by inviting us to share in a common experience of living here, right now.